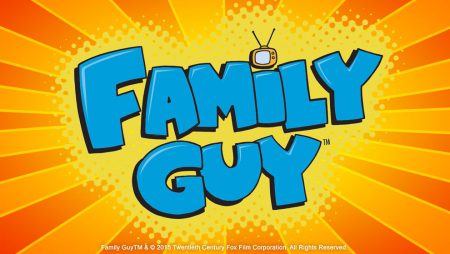 How to play Family Guy Slots

Family Guy slots is based on the hit TV show, developed by IGT. This slot game has 5 reels and 30 paylines in play with bets starting from as little as £0.50. There is one big bonus filled with mini-games waiting to be unlocked with a lucky spin landing. There is no mascot in this game, but each of the famous Family Guy characters is present on the reels, with some of them having their own mini-games.

The Family Guy online slot has some fantastic mini-games, all accessed through the bonus symbols in this casino game.

Calling all Family Guy fans! With the familiar backdrop of the Griffin family’s living room, you will see the famous faces on the reels, from Peter and Lois, to Stewie and his laser gun. With a lot of bonus features, you are set for non-stop action in gameplay.

Have a read through our Family Guy slot review to get to grips with it before you pay to play.

If we’re comparing the graphics to the quality on the TV show, then they look pretty accurate. Each of the Griffin family has their own symbol with their name next to it as if they’re on the opening credits to a reality show, so if you don’t know each character by name, you will do soon.

The living room also looks like a direct replica of the original, so it feels like you’re engrossed in the show.

Depending on the device you will be playing on, the quality of the graphics can be adjusted so that there is no lag in the spins, and that you can clearly make out what you’re spinning. Click the yellow ‘i’ in the blue circle to adjust the graphics quality to suit your screen.

All 30 paylines plus the bonus features are always in play and will cost you 50 coins per spin. You can change the coin value to put extra weight on each of the paylines. The coin value can be between 1 and 30, and you will see your total bet in the box beneath reel two.

Winning with the Griffins

Once you’re set up to play with Family Guy slots, you’ll need to know how to win.

Winning paylines are played from left to right, and you will need to match a minimum of three of the same symbols to win.

The highest-value symbols are the Griffin family. Parents Peter and Lois can pay out up to 250 times your coin value for a five-of-a-kind match.

Brian the talking dog and his good pal baby Stewie are worth the same. Match three or more of one or the other to win, with the highest payout being 200 times your coin value.

The Griffin’s son, Chris, can pay out 150 times your coin value for a full five-match, and his sister Meg pays out up to 125 times. As do Stewie’s laser gun and the teddy named Rupert, for five-of-a-kind.

The lowest paying symbols are the TV and the beer, which when three or more of the same symbols are matched, will pay out between 5 and 100 times your coin value.

The Family Guy logo is a Wild in this game, meaning that it can help to create winning paylines by substituting for other symbols. If you are lucky enough to land three or more Wilds on a winning payline, you could get up to 500 times your coin bet.

What about any special family features?

There are a number of bonus features which can be unlocked. Matching three of the World Bonus symbols on the three middle reels will trigger the Bonus.

One of the following bonuses will be awarded:

This bonus will take you to the pub where you can select one of the characters. You have the choice of Peter Griffin, Quagmire, Joe Swanson or Cleveland Brown.

You will then have to ‘pour the guys a pitcher’ while they brawl in the background, and the amount which comes out of the taps will be added to your win. If one of the taps displays a ‘win all’ sign, you will win the combined amounts from each of the taps.

The characters you haven’t chosen will continue to party and then rest their heads on the table. As each one does, your chosen player’s multiplier will increase, meaning that your tap wins can be doubled, trebled, or multiplied by five.

If the globe lands on this one, it’s up to you to settle some unfinished business. You can choose whether to side with Peter or the Giant Chicken as your fighter.

You will play three rounds in the fight, with between 1 and 7 picks awarded in each round.

Each bag of money in the ring is filled with coins to add to your win, which can range from 5 times to 1000 times your coin value.

Every round your fighter wins, the multiplier will increase.

Landing Lois on the globe will trigger this bonus, where you are on a mission to create a romantic atmosphere for Peter and Lois.

The Wild in this round is Peter inside a love heart. If you earn these, you’ll keep Lois happy. These will fill up the heart-shaped meters at the bottom of the reels, and then turn the related Lois symbol Wild on the reels. This means that more symbols can become substitutes, allowing for more potential wins during your game.

If Quagmire pops up during the game on reel 3, you will win five extra free spins.

One of these features can be triggered on any spin that a Bonus symbol doesn’t appear on the reel.

Peter will walk across your screen and fart out a prize amount which will be added to your coins.

Stewie’s bonus chooses between 1 and 5 reels then transforms up to three positions on those reels into wilds.

Lois’ feature chooses up to 3 family members and selects win values for each to be paid when the reels land.

Brian’s feature allows the trigger of the World Bonus when at least one symbol is on the reels.

The Verdict on the Family

If you’re a fan of the TV show, you’ll be sure to enjoy it and will understand all of the jokes. If you’re new to family guy, prepare for a few adult remarks. The bonus features are plentiful and enjoyable, each of them providing a good level of opportunity to increase that prize fund.

The quality of the game itself is good, it’s just down to personal preference as to if the theme is for you.

The soundtrack is familiar to the TV show’s theme tune, like a Broadway show opening or finale, which restarts every time you spin, if you like playing with sound.

You can spin with the Griffin’s at Kerching.

The Return to Player (RTP) value of Family Guy slots can vary quite dramatically between 92.50% and 96.05% due to the different bonus round options. It is a medium variance game, meaning that you are likely to win decent prizes quite often.

If the themed games are the ones you like most, there are a whole host of them out there which are similar to the Family Guy online slot game we have discussed here. There is Jumanji from NetEnt and Baywatch from IGT. There are also some great music-themed games such as Jimi Hendrix, from NetEnt.